Changing of the Guards Ceremony 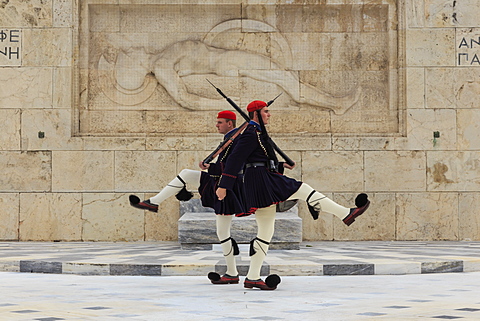 The monument of the Unknown Soldier was erected after the First World War, to commemorate the soldiers that have fallen for the freedom and the independence of our country. Ever since, the Presidential Guard stands there, guarding the Monument day and night, throughout the year. The Members of the Presidential Guard are Greeks doing their military service, mandatory for every male above the age of 18. After having gone through a very demanding selection process and a very tough training, the Members of the Presidential Guard are some of the best trained soldiers in Greece.
The uniform of the soldiers -varying depending on the day or the season- is inspired from different battles the Greeks have fought throughout the ages: The Independence War, the Balkan Wars of the First World War. Their red hats show the blood that was shed in the battles and the black decorations hanging from their socks symbolize tears for those who fell in the battlefield. Visitors can catch the changing of the Guards every hour on the hour, day or night, while the ceremonial changing of the Guards takes place every Sunday at eleven o clock in the morning.