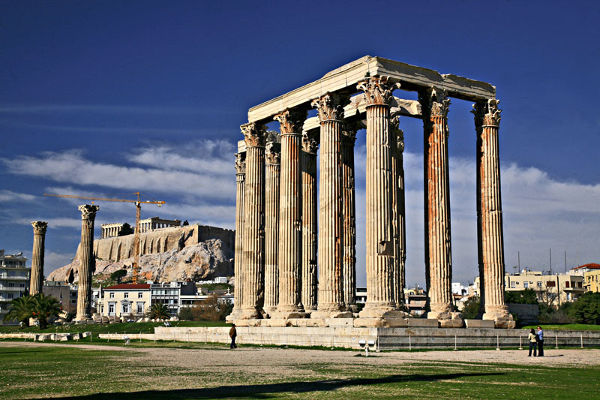 The first site we visit is the Temple of Olympian Zeus, just a few meters away from Hadrian’s Arch. Once the largest temple in Greece, this temple was built by Hadrian in the beginning of 2nd Century A.D as part of the ambitious building program the emperor had for the city. Visitors from the roman times up to this day are overwhelmed by the immense size of the structure: boasting 104 columns of Corinthian style each of them rising 17 meters high and weighing more than 360 tones, the temple was 110 meters long and more than 40 meters wide. Inside there was a large statue that was made out of gold and ivory built by Hadrian, as well as one of Hadrian built by the Athenians, as a way to honor their beloved emperor. Around the temple visitors would find more statues depicting gods.
As pagan worship was renounced in the Byzantine times, the temple was abandoned as many other such temples were. Parts of it were used as building material for new structures. Today the site does not serve solely as an attraction but also in the past it has been used as a venue for concerts.